I figured if I want to give myself any relevance to the types of readers I’m hoping to attract, I’d better give you my background story. It may highlight what I’ve been through that should make you at least consider browsing my blog if you’re on any of the paths I’ve once taken.

I’d like to start my story in April of 2013, but really I’ll need to back up to September of 2012 because my journey started long before I became a runner. 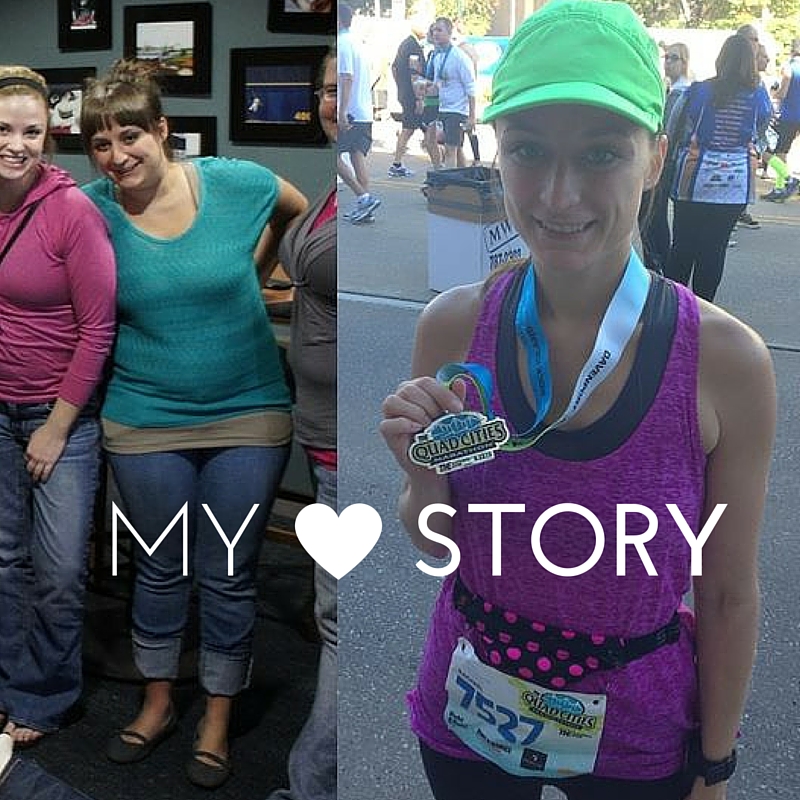 I was one of those people in high school that most girls hated. I wasn’t too big and I wasn’t too skinny. I was thin, lean and athletic and that probably came from my obsession of soccer. I played soccer for most of my youth. I could eat an entire frozen pizza to myself and remain the same weight on a daily basis. It was beautiful.

This appetite or metabolism didn’t come to a dead halt until I became pregnant with my son. I continued to eat as if nothing had changed and I did very little focused exercise. The heavier I got, the less I liked to move. I ended up gaining over 40 pounds, clocking in at 180 pounds (almost 13 stone for you UKers) and extremely top heavy on my small, 5’2″ frame.

After my son was born, I lost quite a bit, but easily gained it back due to negligence. My heaviest was 172 pounds, and that was the week I finally weighed myself and decided “this was it. I’m losing this weight.” After 2 1/2 years of being depressed, I was over it.

This is where my journey begins. In September of 2012 I began to track everything I ate. I gave myself a strict calories diet of 1200 calories and  learned ways to cook and eat that were far smarter than before. I can honestly say that I learned a lot about my body and eating habits. I can also honestly state that I don’t think I had eaten French fries for over a year during this period. One of my favorite foods now.

I started at 172 pounds in September of 2012 and hit my first goal of 130 pounds by my birthday, December 1st 2012. That’s 42 pounds in four months. I decided to attempt another 15 pound loss, which obviously was way harder than the first 40. I hit 115 pounds in April of 2013. It took me four more months to lose that last 15 pounds. That really goes to support the plateau theory.

To summarize, I lost 57 pounds by doing nothing more than tracking my calorie intake. I had not yet started to workout yet by this point.

I was asked by a friend in early April, possibly end of March, to run a 5k with her mid-month. I had been swimming off and on and fully understood that if I wanted to maintain all the hard work I had just done I would need to start a fitness regimen. I bought a super cheap pair of running shoes, because I didn’t want to bankrupt myself if I didn’t end up enjoying to run, and had two weeks to get myself from 0 miles to 3.1 miles in a decent amount of time.

I’m going to be honest here, and tell you that I cannot remember what it was like to first get out there and attempt a mile. I can tell you that the first time I hit 3.1 miles it was raining and it had taken me shortly over 34 minutes, and I was damn proud of myself.

It was a super cold morning that mid-April day, when I lined up for my first ever race. I can’t remember exactly, but my memory tells me it was an extremely hilly course. In reality, it probably wasn’t. I just remember a long, slow hill on the way back to the finish line that I about died on.

I finished my first 5k in shortly over 30 minutes. Then I immediately went home and signed up for my next. My times got progressively  better throughout the year. I ended the year in August with a time of 21:34. Can you exclaim MASSIVE IMPROVEMENT in giant letters across a neon  billboard? During this time I was also concocting my “First Half Marathon Plan” for September (1 year after my weight loss initiative began) and my “5k -50k Plan” for the following spring.

Chapter Three – My First Half Marathon

The completion of my first half marathon is cataloged in my lovely weight loss photo in the featured image of this post. I love using that comparison because they are almost exactly one year apart.

I can also describe this as the start of my addiction to long distance running. I finished my first half marathon in 2:01. I thank all of the 5k’s I did prior to this (I believe it was almost 20 for the summer) for the speed training. It took me almost two years to bust under a 2 hour half marathon.

I decided shortly after this race that I wanted to 1. Run a 50k in April of 2014 and 2. I wanted to run the full marathon version of the same race.

Yes, I’m skipping over the 50k story for just a few moments to talk about what happened 1 year after my first half marathon. After I completed my 50k in April, I began training for my first full marathon. It was a ton of hot, summer Iowa miles along the river. I have to admit, I absolutely hated marathon training.

I finished my first, hot, miserable full marathon in 4:56. Definitely didn’t do enough speedwork. It was at this point that I really didn’t want to try a full marathon ever again.

Let me just begin to explain to you the absolute madness I prevailed through in order to complete my first 50k. The race I chose had several ultra distances, 30 miles being the shortest race distance. It was hilly, and hellish.

But here’s the kicker. My race started at 8pm, and went throughout the night. YES! That is the answer to your question, “Are you freaking crazy?” I had never ran at night, I didn’t train to run at night, and I was just balls to the wall ready to pop out of my comfort zone and try this out. So I did. It took my almost 9 hours to complete this race, and I will never, ever do that again. I have given myself a True Grit card for that race.

I didn’t run another 50k until about a year later, in March of 2015. That one was a lot better. First off, it was during the day. Second, I actually trained for it. Third, I finished in a little over 6 hours. PR, hooray! It was shortly after this race that I decided it was time to upgrade my ultra. I signed up for my first 50 miler.

Chapter Seven – Who I am Today

Do you ever wonder what shaped you to be the person you are today? I don’t. I don’t have to. The last five years of my life taught me way more than I ever learned about myself the previous 23 years. I have a power and confidence that you can’t get through nights out at the bar or from perfectly angled selfies.

I hope to add many more chapters to my life, but here is where I am leaving off. These days I am working on building strength. I still run, but I am incorporating yoga and lifting into my training . I know there are bigger and harder things out there for me to accomplish, but I know from the last several years of rampant “upgrading” that I’m going to need to do a lot more if I want to be a lot better and do a lot harder things.

I’m taking this year to reflect and focus. My next 50 miler is not going to understand what or who the hell hit it, because once I’m there I am going to be better, stronger and faster than my previous years. 2016, watch out!

Note: This story was written as candidly as possible. Please excuse any profanity or typos, as I am just trying to keep it real.

2 thoughts on “My Story”

My journey as a mother and a runner

Running Far and Having Fun